With his one-year-old child strapped to his back, an Edmonton resident didn’t hesitate to help save the life of a fellow citizen.

Chris Hancock was recognized for his brave actions, along with 17 other deserving citizens, at the Edmonton Police Commission’s 2022 Citizen Awards on Nov. 18, 2022, at the Edmonton Expo Centre. 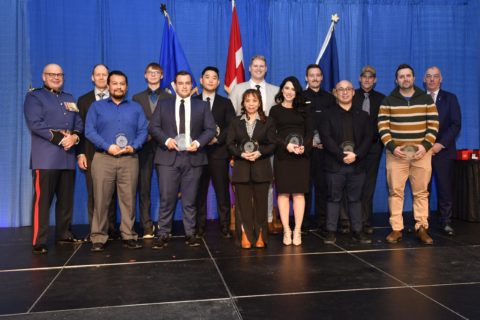 Back in March, Mr. Hancock was out walking with his young child in a baby carrier on his back when he noticed an individual acting suspiciously on the High Level Bridge. Mr. Hancock’s previous work experience related to social services taught him to stick around. Without warning, the individual began to climb under the bridge’s suicide prevention barriers. Mr. Hancock selflessly leapt into action and grabbed the individual by the legs to prevent them from plunging into the frigid North Saskatchewan below.

Two other passersby arrived on scene, and together the three of them were able to prevent the suicidal individual from jumping off the bridge. Once police arrived, they were able to take the individual into custody, who was then transported to hospital by Emergency Services. None of which could have happened if not for the quick and selfless actions of these three citizens to save a life that evening. Their efforts earned nominations from the Edmonton Police Service and all three were honoured with Citizen Awards from the Commission.

“The importance of the police’s role gets missed or overlooked lately. In this situation I believe police were the most vital role for helping the individual. They connected them with the appropriate resources after the incident, which included a hospital stay through Alberta Health Services. Not only did the constable involved follow up with me, but also a shift lead. I was also offered professional mental health support if I needed it.”
Chris Hancock, 2022 EPC Citizen Award recipient

The Citizen Awards acknowledge civilians who have intervened in a crime in progress; assisted the Edmonton Police Service in apprehending an offender; played a major role in the successful outcome of a police investigation; or put themselves at personal risk by coming to the aid of a police officer or fellow citizen in a dangerous situation, and in doing so have prevented injury, trauma or death.

The commendable actions of these award recipients have made our community a safer place to live, work and play.

Due to the nature of the events which resulted in these awards and privacy considerations for the individuals involved, the Commission will not be releasing the names of all award recipients.

If you are in crisis or in need of support for mental health or addiction, call the Alberta Health Services Mental Health Help Line toll-free at 1-877-303-2642. This help line is a confidential service operating 24 hours a day, 7 days a week, and throughout the year.

Previous: Per Capita Police Funding
Next: Review of Chinatown Events